The South East Regional Swimming Championships began a month of competition during with the Youth Championships for 15 years and above being held at Portsmouth’s Mountbatten Centre. Seaclose Swimming Club had three swimmers, Megan King, Amber Backhouse and Alex Stewart who had achieved the tough qualification times.

Megan King, on her birthday weekend, had qualified in four events and in two of them achieved two fantastic Bronze Medals in the 15 years age category. Megan qualified in 3rd place for the final of the 50m Freestyle event and maintained third place in the final in a new personal best time of 28.40 sec. In the 50m Backstroke event Megan qualified 5th but improved to third place to take her medal in a time of 32.19 sec. Megan also finished 13th in the 50m Butterfly events and 14th in the 100m Backstroke event.

Amber Backhouse, in the same 15 years age group, had regained her form from two seasons ago to once again qualify for the regional championships and produced a time of 39.50 sec to finish 22nd in the 50m Breaststroke event. Alex Stewart who had qualified for the 1500m freestyle event suffered a training injury two days before the competition and had to withdraw from the event.

The Championships continue in Crawley on the 14th, 15th, 28th and 29th May with the younger 14 and under age group swimmers taking part with both Ben Curliss and Abigail Lacey from the Isle of Wight among the participants. 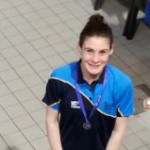 Megan swam five events at the three day event and achieved three personal bests and a silver and two bronze medals in the 15 years age category. Megan recorded a time of 32.74 sec in the 50m backstroke event to gain her silver medal and a time of 29.08 sec to achieve her bronze medal in the 50m freestyle event along with a time a personal best and time of 1.11.49 sec to gain bronze in the 100m backstroke. Megan also achieved personal bests in the 50m Butterfly and 100m Freestyle events and now has 4 Qualifying event times in the South East Regional Championships in May.

Whilst no medals were gained Lottie van der Helstraete gained a very impressive six new personal bests from six events at the Littlehampton Level 3 Easter Meet. Lottie’s best event was the 100m Butterfly where she gained fourth place in the 11 years age category beating her previous best time by 7.40 secs to record 1.41.14 sec. Lottie’s other personal bests were in the 50m Butterfly, 50m Freestyle, 100m Breaststroke, 100m Freestyle and the 50m Breaststoke.

Also at Littlehampton was Zac Lacey who competed in the 15 years age category and gained three new personal bests from his four events with his best finish a fifth place in the 200m freestyle event where he bettered his personal best by 16.61 secs to record a time of 3 min 21.92 sec.

The swimmers are now looking forward to the Isle of Wight Swimming Championships which will take place over the weekend of 23rd and 24th April at Medina Leisure Centre with the doors opening at 5.30pm on each day.

Please see the below Team Selection sheet for the Rother league which is on the 16th April. Round 1 Team Sheet 2016

Ten younger members (9-11yrs) from Seaclose SC were invited to take part on Saturday evening in the Invitational Junior Meet, along with 9 other swimming clubs from around the South Coast region at the Pool in the Park in Woking. For some of the 9yr olds in particular, this was their first experience in swimming at a mainland open meet and their commitment in training definitely paid off, despite such a long journey and extremely late return! They were able to compete in three events plus a 200m relay at the end, with the 11yr olds also doing the 100m Individual Medley.

Their nerves didn’t show at all and an amazing 28 personal best swims were achieved across the swimmers and five swimmers, George Hayward (9), Oliver Lacey (9), Joshua Sunnocks (10), Mia Stillwell(10) and Lottie-Rose Van der Helstraete(11) all came within the top 8 overall swimmers in their relevant age categories and obtained merit awards for their performances.

Gavin Muncaster, the Seaclose SC coach who not only coaches these children regularly but accompanied the team to this gala was full of praise and encouragement for these youngsters and hopes for a bright swimming future for them all……. 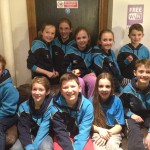 eason began it The youngest gold medallists of the weekend were in the 25m Freestyle where Sophia Elliott took the girls title in a time of 30.89 sec and Oliver Lacey took the boys title in a time of 22.95 sec. The swimmers now turn their attentions to the Hampshire County Championships which take place over three weekends in March and where a number of Isle of Wight Swimmers will be looking to challenge for county titles.

Whilst the Sprints were taking place four Isle of Wight swimmers, who had gained qualification, took part in the South Zonal Swimming Championships at the Olympic Pool in Stratford. IW Swim Team members Abigail Lacey (100m and 200m Backstroke), Megan King (50m Freestyle), Alex Stewart (200m Backstroke) and West Wight Swimmer Jake Williams (50m Backstroke) all gained from the experience at the world class venue. Megan King produced a new Personal Best and the other swimmers were all very close to their personal best times as they competed against the South West, South East and London Regions top swimmers.

ALL Junior Squad Members – Novice Gala – Sunday 20th March – Medina Leisure Centre. This Sunday there will be a ‘Novice’ gala to give all Junior Squad swimmers the chance to enter a competition. The doors will open at 5.00pm, with the warm up at 5.15pm on Sunday. It’s a good opportunity to compete in a very relaxed atmosphere. The gala will be for anyone in Junior Squad and swimmers who are aged 8-14 on the day of the gala. If you would like to attend please e-mail coaches@seaclosesc.co.uk by Friday the 18th March to confirm. Adults – this is also a great chance to try timekeeping or helping at a gala with no previous experience required. Let us know if you can help out by e-mail.

Anyone interested need to check the long course qualifying times and email the individual entry forms by the 15th March at the very latest to Val openmeets@seaclosesc.co.uk

Please see the link below for the latest Committee Agenda

Abi becomes Hampshire Champion for third successive year. Abigail Lacey of Seaclose Swimming Club became the Hampshire ASA County 200m Individual Medley Champion for the third year in a row at the second of three weekends of Championship swimming action. Her time of 2.29.35 sec gave her the title which she also won at age 12 and 13. Abi also topped this off by winning the 50m Breaststroke title in a time of 36.50sec and along with a further seven medals she gained nine medals from a possible 11 events. Abi won silver in the 100m Freestyle and 200m Backstroke and Bronze Medals in the 400m Individual Medley, 400m Freestyle, 50m Fly, 50m Freestyle and 200m Freestyle; there was a fourth in the 50m Backstroke and fifth in the 100m Breaststroke. The times Abi achieved in all her events have also now qualified her for the South East Regional Championships in May. There were only three Isle of Wight swimmers who were swimming this weekend at the final weekend for the Age Group Championships with the others being Ben Curliss of West Wight Swimming Club and Mia Stillwell of Seaclose. Ben had a busy weekend in the age 14 boys and produced five new personal best times throughout the weekend. Ben’s best result was in the 50m Freestyle where he produced a PB time of 28.06 sec to finish fourth in the final and just miss out on a medal. Ben’s other PB’s were 200m Back 2min 33.15 sec (8th), 200m Freestyle 2 min 16.15 sec (9th), 100m Back 1 min 13.14 sec (10th) and 100m Freestyle 1.01.83 sec (5th). This was Mia Stillwells first ever Championship and she showed her potential for the future in her three events in the 10/11 age group with her highlight being the 200 Individual Medley finishing 12th in a new personal best time of 3 min 16.08 sec. Mia also competed in the 50m back and freestyle events. The championships now move onto the final weekend at Portsmouth which are the youth events for the swimmers aged 15 and over.