Zac Lacey 14, competed at The Down Syndrome European Swimming Championships at The Quays in Southampton over the weekend of 28th and 29th of March. The event had representatives from Scotland, Ireland, Estonia, Spain, Sweden, Russia and Brazil.

The Isle of Swim Team Member had a very successful weekend swimming in five individual events and also competing in the relay event. Zac can now say he is European Champion at the 25m Backstroke event when he produced the fastest time of the day for the event in a new personal best time of 21.22 sec. Zac then went onto produce a personal best in the 100m individual medley (1 min 50.41 sec).

Zac was also selected to swim in the England junior relay team (200m freestyle relay) which did extremely well as the only under 16 team to make the final and the four swimmers did exceptionally well to finish fifth against more established international teams.

Zac’s performance over the weekend was recognised by the Great Britain Down Syndrome Swimming Team coach and Zac has been invited to attend a Great Britain Training Camp in Batley, Yorkshire at the end of April which will hopefully be the start of bigger things to come. 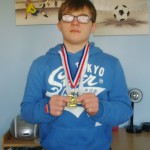